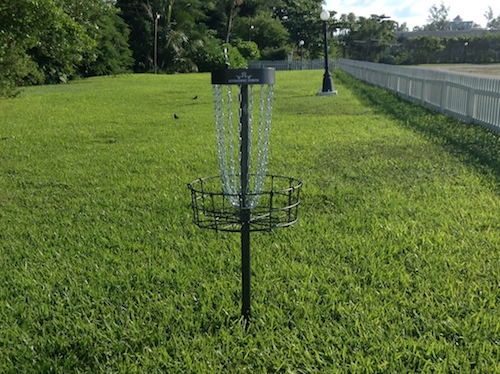 We have installed two disc golf practice baskets in Phase V. For those unfamiliar with the sport, a description provided by the Professional Disc Golf Association states:

Play on each hole begins at the teeing area and ends at the target. After the player has thrown from the tee, each successive throw is made from where the previous throw came to rest. On completing a hole, the player proceeds to the teeing area of the next hole, until all holes have been played.

Disc golf courses are normally laid out in and around wooded areas with diverse terrain to provide natural obstacles to the flight of the disc. These natural obstacles are very much a part of the game and must not be altered by a player in any way to decrease the difficulty of a hole. Players must play the course as they find it and play the disc where it lies unless allowed otherwise by these rules.